Gordon Sullivan is the joint owner of Mc & S Agri, New Holland main dealer for Cork City and surrounding areas, including a new branch in Bandon, covering West Cork. Mc & S Agri have been servicing the needs of the agricultural sector since 2009 with a vastly experienced and highly trained staff of 12. Between the two branches; Ballincollig and Bandon, and with their modern, high technically equipped workshop in Ballincollig. Gordon has a lot of experience and knowledge of the problems facing machinery owners and operators due to diesel contamination and quality and having used Actioil himself to solve problems he had we asked him recently about his experience with Actioil. 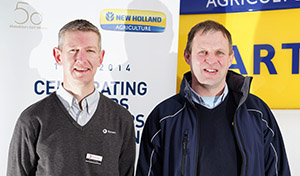 Can you tell us a little about when and how you first came to use Actioil as a treatment for your diesel and machinery?

In the winter of 2010 I encountered problems with one of my tractors. It was running poorly. I changed the filters, which very unusually were in a very poor state, but it continued to operate poorly. I changed the filters a second time and quickly realised I had an issue as the filters again were destroyed only after a short period. The tractor was drawing diesel from a mobile tanker, 750L mobile tanker. I checked the condition of the diesel in it and it was badly contaminated with water. The lid on the tanker had not been secured properly and there was a few days’ worth of rain after getting into the diesel. I thought I was in serious trouble now with the tractor and that the diesel would be lost and the tanker would have to be completely cleaned out. I had heard about Actioil but had never used it. So I made some enquiries, which led me to your office (Finol Oils) and I was told not only would the Actioil treatment cure my tractor but that it would also get rid of the water in my tanker and save the diesel too!”

How did you get on with the treatments?

The tractor took two litres of Actioil in with the diesel. I ran it through for about quarter of an hour and as fast as that, my problems were gone. The tractor was perfect; running perfectly, sounded perfect, all the power and torc was restored. I couldn’t believe it.”

And the mobile tanker, did you treat that too?

Yes. And would you believe all it took was another two litres of Actioil. I added it into the tanker with the diesel, filled it up to the top with diesel as I had been instructed. And three hours later I started using the diesel that was previously contaminated with water in my machines without any incident. I couldn’t believe it. I was sold on the treatment.”

Do you have storage tanks? Did you consider treating these??

Well, the next thing I thought was if the treatment worked so well in the tanker and the tractor, maybe I should look at treating my main 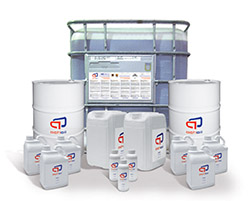 diesel storage tanks. I contacted Finol’s office in Dublin again and discussed the wider application for the Actioil. After having a good talk about it we decided the best thing to do would be let’s get a sample of diesel from my storage tanks tested and see what’s going on in them”

Did you? What did you find?

Again, I was shocked at the results. I had water content in the diesel in the tanks. They were older steel tanks, two 5000L tanks. They must have been contaminated with water over time, I now know this is a regular occurrence but at the time I was very worried. There was evidence of rust too in the sample results.”

What did you do?

Well the staff in Finol said to treat the tanks immediately with Actioil. The tanks were low in diesel at the time so the timing was perfect. I treated them with 3L of act oil per 1000L capacity of the tanks, 15L per tank. I then filled up my tanks to the top and used my diesel as normal. I had seen it sort out the tractor and mobile tanker so I was confident that the diesel was now cured, and it was. I had no more diesel issues. Not then, and as now I use the product in my storage and in my machines, not now either! One of the most interesting side lines to this too is, if you remember back to that winter, it was a right cold winter. I had many reports from people locally that their diesel was gelling that year. Lads were in right trouble that winter. But my diesel was spot on. I had no issues with it or in my machinery and I know it was down to the Actioil treatment.”

Do you use or offer Actioil as a solution to diesel issues in business too?

Absolutely, yes. We have seen massive damage done to machinery by poor quality diesel and water in diesel. It’ll do serious damage to injectors and pumps, not to mention blocking filters. We offer it (Actioil) to customers as a very cheap alternative to stripping down machinery and cleaning out the sludge left from bad diesel. We used it (Actioil) to restore injectors and injector pumps. It is amazing to watch Actioil in Action! We had a tractor in with us around a year ago. It had been idle for three months. There was evidence of water in the filters and the tank. It had probably separated from the diesel while the tractor was idle. There was rust in the injector pump. This caused it to stick and there was uneven distribution of fuel to the injectors. The result was what we call hunting. It was running right poorly; no power and the fuel wasn’t coming through.”

Did you treat it with Actioil?

Yes. We put it in through the injector pump neat. We really gave it a strong dose of it. And it cured it. Within five minutes, the Actioil had freed up the pump and the injectors. We didn’t replace them or recondition them, all we did was treated the tractor with Actioil and it cured the problem. Now that was a small price to pay, 2L’s of Actioil and a couple of fuel filters compared to overhauling the injector system.”

Have you used Actioil in any other applications?

Yes. The combine at home gets treated with it every year before it goes into storage. I run a couple of litres of it through the diesel for about twenty minutes, then I fill it up. It protects the injectors and the pumps for the winter. It also protects the diesel in the combine over the winter and when I bring it out again the next year it starts and runs away fine. I’ve been doing that for years now”

Would it not be best to store the combine low in diesel, to empty the tanks over the winter?

No, absolutely no way. Doing that will get you in all sorts of trouble with the machine. There is no way you could protect the pumps etc. from rust and decay over the winter if you do that. No, better to treat the machine with Actioil and fill it up with diesel.”

Well just think of it this way, the diesel we use today is not as robust as what we had been using down through the years. It’s causing all sorts of problems for machines and storage tanks. I would always look first at the problem before me and apply Actioil as a solution before I look to go down other avenues, other more expensive avenues. Actioil can and will cure the issues caused by poor diesel, water in diesel and sludge in diesel. We have had very mild winters of late really. All it would take to really kick off a massive diesel contamination crisis is some right cold weather. Actioil is the treatment to protect diesel and machinery. It’s out there in the market and its applications are very wide ranging. I can’t but recommend it for diesel issues and for protection against serious and costly damage.”

We would like to thank Gordan and all his team in MC&S Agri for taking the time to talk to us and allow us to publish his testimonial. Actioil is available in both the Cork & Bandon branches of MC&S Agri and to find out more about the benefits of Actioil, click here.