Total Lubricants and Citroën, A 50 Year Partnership Built on Innovation

Total and Citroën have put in many miles together since 1968. Their success story, built on innovation 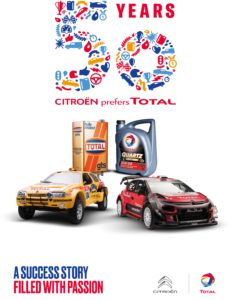 and passion for motorsports, has taken the two brands all the way to the top of podiums. We look back at 50 years of a partnership studded with business and racing successes that helped build both companies’ international standing.

Since the partnership began in 1968, Total has helped drive Citroën’s industrial growth worldwide by supplying a wide range of automobile lubricants. Over the decades, the two companies have jointly developed lubricants specifically for Citroën engines, to make them even more fuel efficient and environmentally friendly.

The environment is a core concern for Citroën and Total. The pair has pledged to drastically curtail their environmental impact, notably by reducing carbon emissions. Their R&D teams co-develop specific solutions that fit the bill. Today their efforts have culminated in the new TOTAL QUARTZ INEO FIRST 0W-20, a synthetic oil for pollution control systems that improve fuel economy by as much as 4%*.

Another cornerstone of the Citroën-Total partnership is a dedication to excellence and competitive spirit. From meticulous oil analyses to trackside checks and from individual rally races to the World Rally Championship, tests and racing events have enabled Total to experiment with lubricants under extreme conditions and make sure that Citroën’s racing and mass-produced cars deliver the best performance.

The strength of the Citroën-Total motorsports partnership was obvious as far back as the Morocco Rally in 1969. Citroën began racking up wins with the Citroën DS 21, and continued its rally racing saga, stringing together 36 victories and five constructors’ titles in the FIA World Touring Car Cup. An incredible run of successes followed between 2003 and 2012, including eight constructors’ titles and nine drivers’ titles in the World Rally Championship (WRC).

In 2014, Citroën and Total decided to race in the WTCC championship, notching up three constructors’ titles, three drivers’ titles and 50 wins. In 2017, the two brands made a fresh start in the WRC with the C3 WRC, a two-time winner, in Mexico and Catalonia.

Linda Jackson, Chief Executive Officer, Citroën Brand, notes that: “After 50 years of working together, we can be proud of our engaged teams and their tremendous contribution to this great success story.” 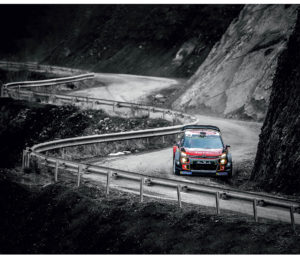 Since adding Total Oils to our range of Brands, Finol have been supplying the Irish network of Citroen dealerships with TOTAL products for their servicing requirements. In Conjunction with Citroen Ireland and TOTAL, we provide product training and advice for all Citroen vehicle requirements. Contact the Finol technical team today at 01-4555 5484 or speak follow the link at www.finol.ie/contact-us/

Find the right contact for your enquiry and get in touch now!

OUR HISTORY
OUR PARTNERS
AFFILIATES
TESTIMONIALS

OUR HISTORY
AFFILIATES
OUR PARTNERS
TESTIMONIALS